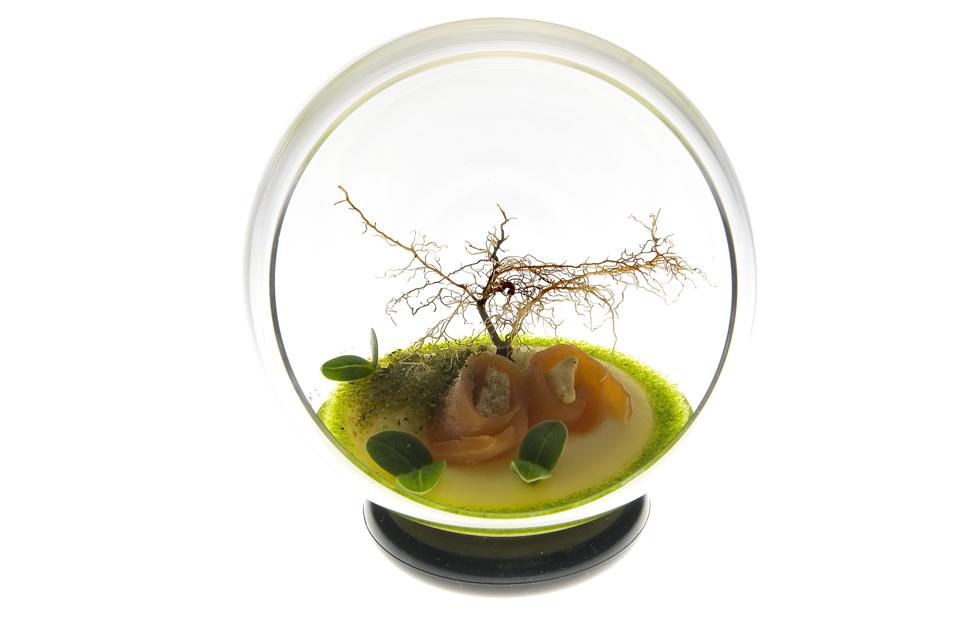 It was recently my great pleasure to return to Slovenia, where I am advising in connection with the country’s impressive nuclear programme, as well as preparing to participate in a large forum being organised for April to celebrate 500 women entrepreneurs. During my visit, I was fortunate to be invited to join Maja Pak, Director of the Slovenian Tourist Board, Sonja Smuc, General Manager of the Chamber of Commerce and Industry for Slovenia, and Eva Stravs Podlogar, State Secretary for the Ministry of Economy, for dinner at one of the most celebrated restaurants in Slovenia, Pri Lojzetu at Castle Zemono.

The restaurant has, over the years, become very famous, both in Slovenia and in the surrounding countries, because of its impressive heritage, as well as its extraordinary food. The chef, Tomaž Kavčič, is a fourth-generation family chef, and charmingly explains that he takes his inspiration from his mother, who was running the restaurant before him. He has often said that he was glad to learn his cooking skills from his family and his travels, rather than from a famous-named chef, as then he was able to develop his own style, inspired by his family and his beautiful country.

The restaurant itself is hidden behind the traditional façade of a 17th Century manor house, which is about an hour outside of Ljubljana. Inside the restaurant, Tomaž Kavčič has decorated it with beautiful scarlet drapes and original frescos rising above gilded footstalls. We were greeted by extremely friendly staff and were fortunate enough to have the menu explained to us by the chef’s daughter, Sara.  She works in the restaurant and aspires to join her father in the years to come. Her lovely smile and articulate description of the dishes made us feel most welcome, so that our dinner began with the feeling that we were being entertained in somebody’s home. Recommended For You

The local area is the Vipava Valley, and every single dish in the restaurant is inspired by the surrounding rich and local gourmet traditions. We were thrilled to be offered a menu chosen by Tomaž Kavčič himself, and it proved to be a selection of the most extraordinary dishes.

All meals at this restaurant start with homemade bread served with horseradish spread. The bread is torn, not sliced, in order to emphasise the family-feel of the restaurant. Our dinner then began with oyster cooked in honey, with caviar and sparkling Zemono Rosé, strawberry cream and onion extract. The combination of these flavours was both unusual and delicious and was an excellent way to begin this exciting culinary journey.

We were then served a traditional beef cheek soup, which contained lovely morsels of charcoal-grilled beef, baby carrots celeriac and parsley – a broth that could have been a meal in itself. Next came eggplant in a tomato sauce made from Vipava Valley matured tomatoes, together with Vipava 1-year aged cheese and dried tomatoes, and the taste of the local produce was indeed sublime.

This was followed by wonderful fresh fish – red mullet with mangold ‘on the stone’ filled with fish brodet and sea bream fillet on a potato cream with saffron, crispy chard and red beet. The fish was superb, the potato cream proving to be a perfect accompaniment to the delicacy of the sea bream.

Finally, we came to dessert, which is often my favourite part of the menu. We were thrilled to taste Tomaž’s own gin and tonic on a spoon, together with two mignons of crispy strawberry and cottage cheese, also served with juniper and gin. We all know about gin and tonic, so we were happily surprised by this lovely dessert inspired by this familiar cocktail.  The grand finale was a trilogy of traditional Slovenian potica, which is a festive nut roll pastry.

All of these magical dishes were beautifully presented, sometimes wreathed in dry ice, or covered in leaves, or accompanied by flowers, reflecting the seasons. The food itself was made from ingredients sourced by Tomaž from the local market, and represented the traditional cooking of Slovenia, modernised by exciting, new, innovative styles and techniques.

All In all, the evening with my three wonderful dinner companions was a real high point in my culinary experience. Each of these lovely ladies provided much information about the delights of Slovenia, both culinary, historic and cultural. It was an honour and a pleasure to dine with them at such a special restaurant, and to have an opportunity to get to know, and appreciate, our charming host. Slovenia is rightly proud of Tomaž Kavčič, one of its culinary heroes. ­­­­­­­­­­­­­­­­

← Letter: Attitudes to women working from home may change forever
The Broken Spoke →