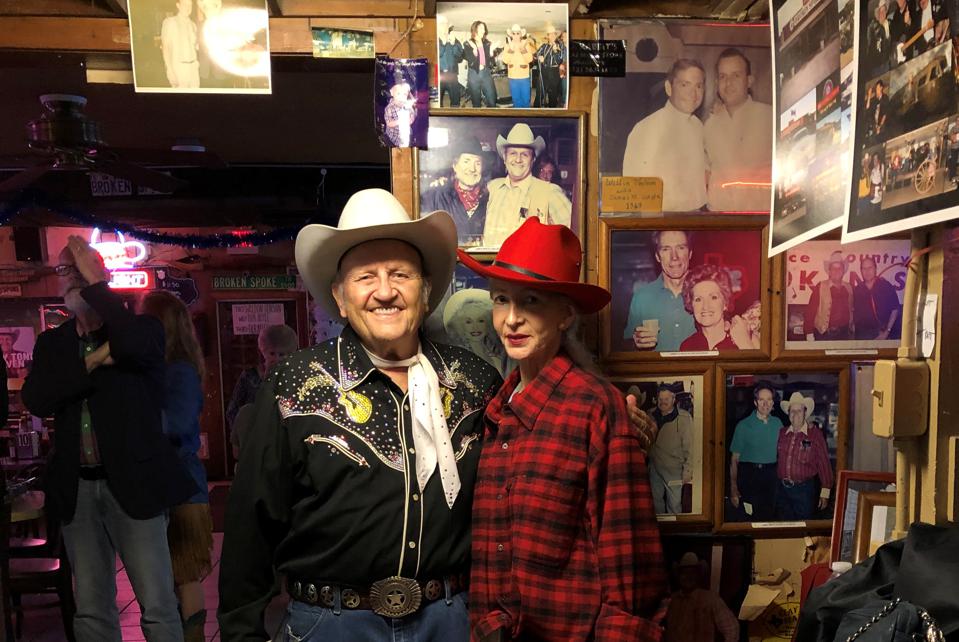 I recently had to attend a Board meeting in America, and was delighted when the venue ultimately turned out to be Austin, Texas, one of America’s fastest growing cities. I had heard so many good things about the city that the very thought was exciting. The hotel we stayed in, The Driskill, had been originally built in 1886, and it was very welcoming and had an authentic, historic, ambience. There were comfortable conference rooms for us to work very hard in during the day, and it was well situated to go out at night, see the nightlife, and hear the music. I chose to go a day early before the meeting was scheduled to start, in order to check it all out. I particularly wanted to go because it is known for, among other things, country & western music. I had always heard that Austin had some of the best, and so, having done my research, I found that the place that was most highly recommended was – “The Broken Spoke.”

So, I headed off with Kuldip Nijjar, the finance director, on Friday night to participate in the fun. Fortunately, I had asked to interview James White, who is the founder and owner, and he was very pleased to do so. He gave us a wonderful tour of the premises and his famous museum of pictures, artefacts and other memorabilia, which has affectionately been dubbed “The Tourist Trap.”

Annetta and James White opened the doors to The Broken Spoke in November of 1964. James was only 25 and just out of the Army. They ran the place on a shoestring. The “place” was a restaurant, with a dancehall attached, where there was live music and good Texan food. At first, little-known groups played there, but slowly but surely the Whites gave a microphone to the likes of Willie Nelson, George Strait, Dolly Parton and others. There are pictures of all these “greats” in his treasure-filled museum, which also features pictures of James White and his Cadillac. The museum gives more than a glimpse of how his famous establishment grew up with him, his family and the country & western stars of the time.

We arrived at about 6.30pm, and had dinner in the dining room where a country music singer was performing. The dinner itself was delicious and, after all, I am reviewing this as a restaurant as well as a dance hall. We shared quesadillas with chicken and beef, both of which were a perfect Mexican version of one of my favourites, and also so huge they could have been a meal all by themselves.

Having sampled the Mexican cuisine, we then went on to the Texan cuisine, where we ordered some of the house specialities. The first consisted of traditional Texas brisket, both in slices and chopped on a bun, with a spicy barbecue sauce. In addition, we had the famous chicken fried steak, which is exactly what it sounds like – yummy. It was served with sweet potato fries, a down-home delicacy that I was pleased to try. The barbecue was wonderful, and the potato salad that went with it was just the right traditional accompaniment. It reminded me of the barbecue I used to eat when I was young. I always liked Texan food even growing up in the North, and this was certainly a good representation.

The reason that people come to The Broken Spoke, however, is not just for the food. Everyone loves the place, as well as the small museum, the aforementioned “Tourist Trap.” It is also possible to arrange to be part of a big group dancing lesson every night before the freestyle dancing begins. We did sign up for the lesson, and enjoyed learning a bit of “line dancing.” It was, however, listening to the music that was really why we came, and it clearly surpassed any expectation we ever had. So, if you like honky-tonk, country & western music, Texas barbecue and a stroll down memory lane, I would absolutely suggest that you make a stop during your Austin trip at this famous dance hall cum restaurant. You can then join many other notable Texans, such as Ladybird Johnson, George W Bush and Anne Richards, who have spent melodic evenings here, if a bit loud. No wonder it has been voted ““Best Dancehall in Texas” by Texas Highway. I certainly agree, and guarantee a good time will be had by all.