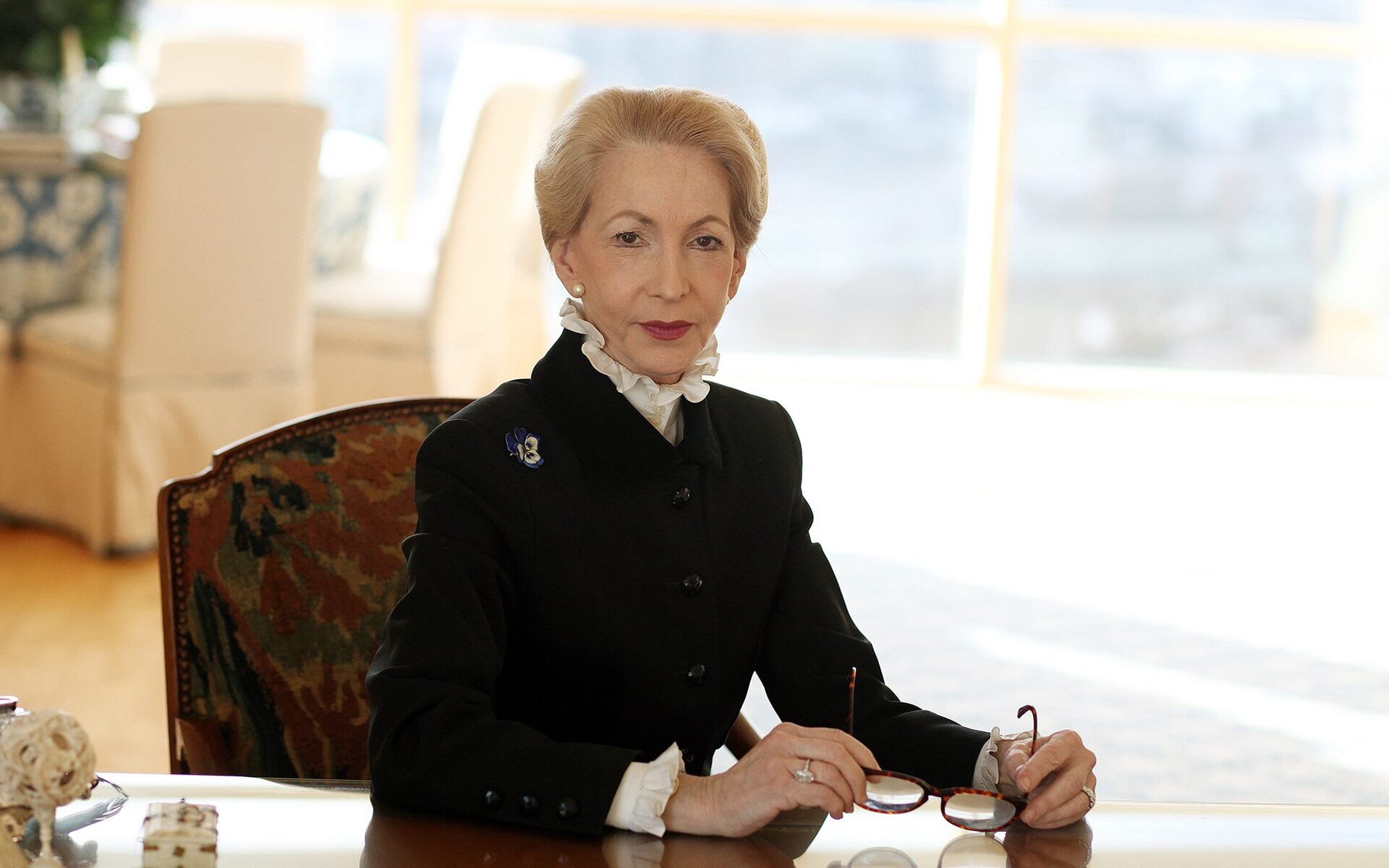 Lady Barbara Judge, a top commercial lawyer from New York, with dual citizenship, has had an extremely broad international career as a senior executive, chairperson and nonexecutive director in both the public and private sectors. During her career, she has been the first female director to be appointed to a British merchant bank, the first female executive director at Rupert Murdoch’s News Corporation and the Chairman of SOAS University of London, Europe’s leading institution for the study of Asia, Africa and the Middle East. She has also been listed on Business Insider’s 100 Coolest People in UK Tech and presented with the Forward Ladies Lifetime Achievement award. Today, Lady Judge consults to a number of countries and companies on nuclear energy, both new builds and decommissions.

Q: In 1980, you were appointed as a member of the U.S. Securities and Exchange Commission in Washington, D.C. On behalf of the U.S. government, you negotiated to open the Tokyo Stock Exchange to foreign members in opposition to some financial commentators who believed that American investors would not be interested in Japanese stocks. How would you describe this achievement which is among the most significant of your career?

A: You have to remember, back to the 80’s, the Japanese were very powerful. In those days they were like the Chinese are today. Japan was a new economy for the U.S. that had very interesting financial markets and companies, and American banks wanted to go there to see if they could do some business. At the same time, the Japanese wanted to go to America to list their stocks in the U.S. I thought it was important for Americans to be able to buy stock in other economies, and I believed other country’s investors should be buying stocks in America – all as a hedge against their own economies. Surprisingly when I wrote an article expressing these views, I got criticism in the mail from some locals who said

“Commissioner why do we care about foreign stocks. This is America, we have enough stocks here. Your job is to put people in jail not think about these other exotic ideas”.

Notwithstanding, I and my team wrote some rules which permitted foreigners to list their securities on American stock exchanges and gave them three years to prepare their accounting statements appropriately. In exchange, the Japanese agreed to change their legal rules to permit foreign banks and brokerage firms to buy seats on their exchanges.

Many things happened in the markets thereafter, but international trading between America and Japan had begun.

Q: You have had an extensive and broad career. Which industry has been the most interesting and why did you move from the United States to London?

A: The nuclear industry, for me, is the most interesting. I was just visiting your nuclear power plant here in Slovenia and I was so impressed. I believe that the world the needs clean energy and nuclear is the best source of base load generation which doesn’t emit carbon, and I like the industry and still advise countries and companies.

Why did I move from America to London, that is a different story! I moved to Hong Kong with my husband and I became a British banker. In those days, in the 80’s, Hong Kong was a very small place and run by the British, it was a very closed society and it didn’t matter how American I looked or acted – if I was a director of a British bank, then I was a British banker – even if I did not look like a British banker! The British people that I met in Hong Kong were nice, very friendly and welcoming. When I went back to New York I didn’t like it nearly as much. I grew up there, but in New York all that people were talking about then was money; how big your apartment was, how many square metres it was – the whole society was about money. I had a young son and I did not want him to think that success in life depended on how much money you had. Then, I remembered the Brits from Hong Kong who did not talk about money and so I thought maybe we should go to Britain where we had many friends and my son would grow up with better values. I really moved because I didn’t think the values in NYC where I lived were good for young children; probably not good for anybody.

Q: In 2002 you became a Director of the UK Atomic Energy Authority and have been the Chairman since 2004. Currently, you are a member of the UK Nuclear Development Forum. What is important to ensure that nuclear energy is available in this century in a sustainable manner, where safety should also be an important factor?

A: It is important that all nuclear power plants have a high nuclear safety culture. Today, the big focus is on climate change, sustainability, low carbon and clean energy. Nuclear, as we all know, produces energy around the clock, 24/7 and without carbon. Indeed, we all know that energy from the sun and wind are very good ideas, however, it is not always sunny and also the wind does not always blow. Furthermore, if you allow only for sun and wind, there will be times when there will be no sun and wind and when you try to turn on the lights they will not go on.

I think, there should be a partnership between nuclear and renewables, that together they provide energy 24/7.

So, I think, there should be a partnership between nuclear and renewables, that together they provide energy 24/7. For some reasons I do not understand, many people who are in the renewables business look at nuclear as a competitor rather a collaborator which seems very strange to me. I think we should talk more about the good things that nuclear has done. As mentioned, in beautiful Slovenia, you have a first class nuclear power plant with high safety standards and you have very impressive people running it. You have a great place to have nuclear energy in Slovenia, it seems to be working extremely well and I have heard that you are thinking of building a second plant. For nuclear energy it is important to have the right geography, the right technology and the right people, and in Slovenia you have all those things.

Q: How safe is a nuclear energy?

A: Nothing is totally safe, but nuclear has a much better safety record than any other energy source; coal, oil, gas, solar, etc.

Q: When you moved to London, you spent a decade working in private equity and took up the crucial role as the first Woman Chair of the Pension Protection Fund in 2010 and 2013. How do you see a pension system in the future as it already quite a serious global challenge?

A: The population in developed countries is declining and people are living much longer. People used to die at 70 or 80 and now somebody born today will surely live over 100 years. The existing population is getting older, there are less babies being born, which means there are less people working to meet the pension needs of the older people and the older people are living longer. Accordingly, I believe that the only answer to the current pension problem is: work longer, save more and expect less.

Q: Being an activist for women in business, do you think that women leaders are born or made? How strong is the culture or environment factor?

A: I do not think leaders are born, I think they are made – women or men. To some degree, some people are more outgoing than other people, but I do not think you can put it all down to genetics. What women leaders need is some sort of coaching; they need mentors and teachers, because even women with leadership potential will never do it alone. They need people who will give them confidence and teach them tricks about how to sit in the front of the class instead of the back of the class, raise their hand and ask the question… it does not come naturally to everybody. For women to be leaders they need role models.

If they do not have their own role model or support system, they will not know how to do it. I have spent a lot of my life mentoring women and I say to them there are little tiny things that make a difference: sit in the front, not the back; ask a smart, short question before the first third of the meeting; and say who you are and where you come from. In addition, women need to look professional to instil confidence in others. I believe that anybody can be anything they want to be. They should focus, learn and decide who they want to be, and then pursue their dream.

Q: Regarding Brexit. You called for Britain to establish a post-Brexit EU trade deal prior to leaving the Union, followed by a transitional period and tariff-free EU-UK trade thereafter. Do you believe this is still possible? What is your perspective on Brexit?

A: I said that at the very beginning. Today I do not believe it is possible anymore. I do not think we can get a soft Brexit. People have hardened their positions and I think that is very sad, I am worried a great deal about it. Now nobody knows what is going to happen and people are afraid – they are afraid in England and they are afraid outside of England. What will happen to trade, medicine, science, everything. The one thing I do think is that we need to get on with it, because uncertainty is making the situation worse. We need to get organised and make a fair deal, if we can!

I believe that the only answer to the current pension problem is: work longer, save more and expect less.